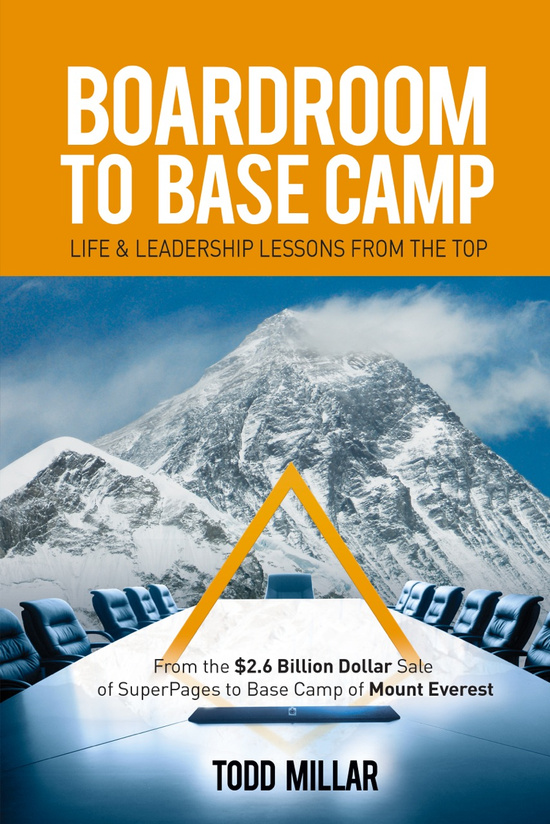 Boardroom to Base Camp

Boardroom to Base Camp is the bestselling story of Todd Millar — climbing to the top, both in business and in life. Millar was instrumentally involved with Bain Capital’s acquisition of Canadian SuperPages for $1.9 Billion Dollars and in less than one year, selling off the assets for $2.6 Billion Dollars. In other words, he made his company $700 Million within a period of several months. Millar suddenly found himself on top of the world.

Months later, Todd Millar bid on a trip that would again change his life forever. He and his son, T.J., were given the opportunity to climb to Base Camp Mount Everest. The life and leadership lessons Millar learned on their journey together paralleled his boardroom experiences, and when he returned home, he crafted the Everest Model, which has shown his executive clients and readers a new way of looking at life and work.

What people are saying about Boardroom to Base Camp

MORON: The Behind the Scenes Story of Minor Hockey

MORON: The Behind the Scenes Story of Minor Hockey is the bestselling book that (in part) led to the ban of body checking in peewee hockey in Canada. (See here for more information: http://bit.ly/check-ban) The book tackles issues such as conduct unbecoming of adults, body checking, bullying, elite hockey programs, the decline in enrolment and perhaps most importantly, how there’s still hope to turn the game around for kids.

Here is a brief excerpt, where Millar experiences moronic behavior first hand: "... As I began to walk more quickly, I could see that this father was violently angry. His face was bright red as he screamed, and the veins on his neck were popping. At this point, he put his leg up on the boards - he was a tall man - and he reached up, clinging to the glass. As a superhero (or super-villain) might have done, this irate father had Spider-Manned himself up the side of the glass at the side of the hockey rink, and was now peering over the top edge of the glass, yelling at the top of his lungs at the teenaged officials. He was screaming every name you could possibly imagine at these poor young referees on the ice."

After seven years volunteering within the ranks of Hockey Calgary, Todd Millar stepped down as volunteer president in September 2012. He had published a post to his private blog entitled, "Neutrons, Neurons, Protons and Morons" which vented his frustrations after an especially difficult meeting. This book grew out of the uproar that followed, and eventually led to a national conversation about body checking and concussions in minor hockey, and a vote by Hockey Canada to ban bodychecking in peewee hockey.

In Millar's opinion, there will always be morons: people who scream at their teenaged kids, guys who climb up the glass like Spider-Man to yell at a rookie referee, women who brawl in the stands. MORON is a wake-up call not only to those unapologetically misbehaved adults, but to the rest of us as well. Here is a list of key points from Millar's book: